5 Reasons Stink Bugs are Attracted to Your Home 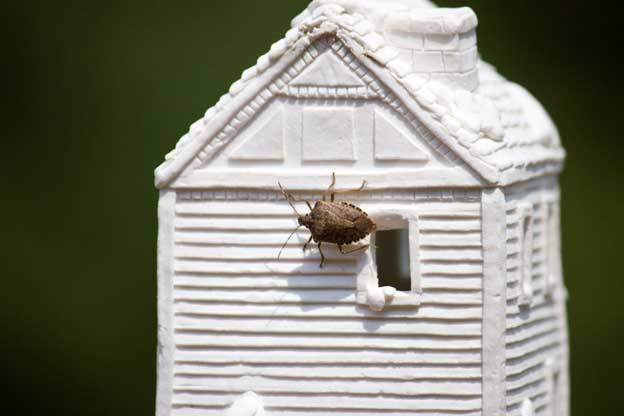 This insect is viewed as a pest for its tendency to congregate inside homes, and while they do not pose a direct risk of harm to people or pets, they can cause significant damage to plants, making them especially unpleasant to gardeners. As the name suggests, stink bugs release a strong, foul odor when they feel threatened.

There are several reasons why stink bugs are attracted to houses, including:

Stink bugs are most likely to be seen during the early autumn when temperatures start to turn colder. In the winter, many stink bugs go into a phase of dormancy called diapause, similar to hibernation, where they don’t eat food and are minimally active. They will use your home as shelter during this period if they can.

2. There are Other Stink Bugs Already There

If one stink bug finds a good location for shelter, it will release a pheromone scent trail (similar to how ants communicate) to alert other stink bugs in the area to the same opportunity. This allows large masses of stink bugs to congregate in a relatively short period of time.

3. Your Home is Located in a Rural Area

Because stink bugs are herbivores and eat primarily plants, they are often found in fields, gardens, and forests. If you live in a rural area near any of these types of environments, it will be easier for stink bugs to reach your home. Stink bugs are also attracted to lights, so you may see increased numbers of these insects if you’re prone to leaving on inside or outside lights throughout the night.

4. There are Plenty of Food Sources Available

Like any other animal, stink bugs need food to survive, and they’ll try to find it in or around your home. Being herbivores, they’ll eat many varieties of plants, fruits, and vegetables, including ornamental plants commonly used in landscaping.

5. They Found an Easy Way Inside

If there’s an easy way to get inside your home, stink bugs will take advantage of it. These small insects can fit through even the tiniest cracks around the doors, windows, pipes, and eaves of your home. You can ensure your home is properly sealed by using caulk, foam sealant, weather stripping, or another material.

Dealing with an infestation of stink bugs can be challenging– not to mention smelly. Let the professionals handle the issue for you with effective pest control services from Nature’s Balance Pest Control. As a locally owned and operated business, we work to achieve 100% satisfaction guaranteed for all of our customers throughout Kamas, Provo, Orem, and all of Summit, Wasatch, and Utah counties in Northern Utah.

Nature’s Balance is different from typical pest control providers because of our commitment to using non-toxic, eco-friendly solutions and techniques that are better for the environment as well as safe for children and pets. Contact us today to request more information or a free quote.